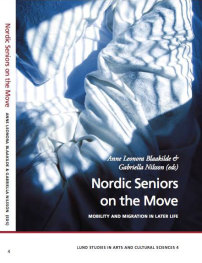 Nordic Seniors on the Move

Mobility and migration in later life.

Abstract
"I believe that all people need to move about. Actually, some have difficulties in doing so. They stay in their home neighbourhoods, where they’ve grown up and feel safe. I can understand that, but my wife and I, we didn’t want that. We are more open to new ideas".

This anthology is about seniors on the move. In seven chapters, Nordic researchers from various disciplines, by means of ethnographic methods, attempt to comprehend the phenomenon of Nordic seniors who move to leisure areas in their own or in other countries.
The number of seniors involved in this kind of migratory movement has grown considerably within the last 20 years. An increase in mass tourism is one explanation, but this may also be the result of generally stronger finances among the age group. Costa del Sol, along the Mediterranean coastline and Österlen in Southern Sweden are two examples of locations that have become attractive to lifestyle migrants. The warmer climate and the expectations of a certain quality of life are recurrent pull factors. The quote above gives voice to one of these seniors, stressing the necessity of moving. In his view, this signifies an open attitude to new ideas – contrary to conventional images of old people as sedentary and disinclined to changes.
It is argued in this book that the fact that more people live longer, with better health, leads to a multiplicity of ways of growing old. As a result of this, paradoxes and polarities might arise; seniors cope with their lives all along the scale between fit and frail, weak and wealthy, poor and powerful, conservative, dynamic and unpredictable. This is valid for the Nordic seniors on the move as well. Moving may entail great economic dilemmas and challenges for individuals, social networks, and nation states. As shown here, mobility and migration have implications for identities, traditions, feelings of belonging, family relationships and friendships, health, images of old age, societal planning and policies, and even for religious attachment.
The phenomenon of seniors on the move is accompanied by a growing academic interest and incorporates a variety of different perspectives and concepts, such as international retirement migration, rural retirement migration and health migration. This book contributes to the international body of literature about later life migration, specifically representing experiences made by Nordic seniors on the move. The incentive to place the Nordic countries in the limelight derives from the significant point that these countries largely share cultural and societal structures and - not least, the weather. The seven chapters representing experiences from a Nordic perspective are finalised by a chapter including an international perspective of retirement migration by the architect Deane Simpson who has studied and worked with gerotopias around the world.
This anthology presents a joint statement, intended for international scholars in the field, but also for Nordic policymakers and practitioners involved in the daily life and needs of the many people who move in later life. If movers and migrants in later life wish for a good read – you are most welcome.

The editors Anne Leonora Blaakilde and Gabriella Nilsson are both ethnologists affiliated with the Center for Healthy Ageing, University of Copenhagen, Denmark and the Department of Arts and Cultural Sciences, Lund University, Sweden, respectively.